Opiates are a class of drugs that are widely prescribed for the treatment of pain but when they are abused, they can have devastating long-term effects on the health of the user. Not only can sustained use of opiates lead to physical dependence and addiction, the long term effects of opiate abuse may cause irreversible damage to the body affecting the organs, the brain and other bodily systems in a number of negative ways.

Opiates work by connecting to the receptors that prevent pain. Unfortunately, many users will inject opiates in an effort to sustain a faster, more prominent high than if the same drug were taken orally or smoked. When needles are used to inject any drug into the body there is an increased risk of infection or infectious disease to spread. People who inject drugs often share needles despite the dangers and potential long term effects that such sharing of needles may cause. 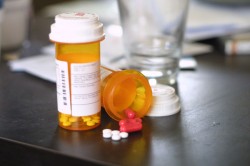 The effects of opiate abuse can permanently damage to your body.

Opiate abusers are at an increased risk of contracting serious diseases through shared needles. HIV and AIDs are widely spread through such intravenous drug abuse. Hepatitis may also be contracted through shared needles associated with injecting opiates such as heroin or prescription painkillers. Further, a contaminated needle can spread a wide range of other infections such as MRSA or Candida. These infections often turn into abscesses and cause deep pockets of infection beneath the skin. Left untreated, such infections can seep into the blood stream and be fatal.

Damage to the Heart

One of the many long term effects of opiate abuse that cannot be overcome is heart damage. When the heart is permanently damaged, the risk for the user to suffer long term consequences increases dramatically. Prescription drugs such as certain opiate based painkillers may be safe for use orally, but when they are injected, the drugs reach the heart more quickly and can cause immediate damage that is irreversible.

An estimated 17% of all addicts who enter treatment for opiate addiction suffer from major depression and more than half suffer from mild depression. One of the many hard to cope with long term effects of opiate abuse is the lingering depression that comes as a result of having used drugs for so many months or years and then trying to get one’s life back on track. There are challenges and hurdles at every corner, giving up hope may seem so much easier, but recovery is the only real way to feel better and to get back in control.

Depression is often linked to the drug use too! Many people who abuse opiates have suffered some deficit in their life that caused them to abuse drugs. Maybe they were lonely, felt like they couldn’t hold a job or make enough money to support their family, felt like they should be something better than they are. All of these deficits have been known to cause a user to slip into the perils of drug addiction and it’s these same deficits that make overcoming addiction so much more challenging.