Oxycodone Abuse Risks & When to Get Treatment

As one of many semi-synthetic opiate drugs, oxycodone derives from Thebaine, a natural chemical compound found in the opium seed plant. Oxycodone exists as an active ingredient in several well-known prescription opiate drugs, such as OxyContin, Tylox and Percocet, each of which includes a non-opioid analgesic, such as aspirin to enhance oxycodone’s pain-relieving effects.

This drug’s status as an opiate comes with a high risk of oxycodone abuse and eventual addiction. Granted, a person may well be prescribed oxycodone as a pain treatment; however, the potential for oxycodone abuse remains simply because of how this drug interacts with the brain’s chemical system.

Understanding the risks involved with oxycodone abuse can help a person avoid falling into the web of abuse and addiction that opiate-type drugs naturally breed.

According to the University of Maryland, oxycodone holds a chemical structure similar to codeine, but produces effects more along the lines of morphine, which makes for a powerful pain relief agent. Oxycodone’s abuse potential develops out of its ability to stimulate neurotransmitter production and essentially alter the brain’s normal chemical processes.

In general, most all prescription-based opiates should only be used on a short-term basis not to exceed three months. Any longer than this and brain chemical processes become dependent on the drug’s effects to secrete neurotransmitter materials in amounts needed to regulate the body’s functions. These developments can take shape regardless of whether a person takes the drug as prescribed or uses it for recreational purposes. 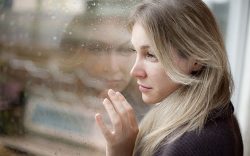 Withdrawal episodes typically bring on the following types of symptoms:

By the time oxycodone addiction sets in, the drug’s effects take on top priority in most every area of a person’s life. In effect, his or her emotional and mental well-being relies on oxycodone effects to cope with everyday life.

If you or someone you know struggles with oxycodone abuse and have more questions, please don’t hesitate to call our toll-free helpline at 800-584-3274 Who Answers? to speak with one of our addictions specialists.

How is Oxycodone Addiction Treated?