Prescription opioid abuse seems to be the epidemic of the day with abuse rates having soared over the past decade. People taking these drugs for medical purposes face considerable risk of abusing opioids, not unlike the person who uses for recreational purposes.

Some of the more commonly used opioids include:

According to the National Institute on Drug Abuse, prescription opioid abuse rates excess those associated with most every other type of drug in spite of their intended medicinal purposes. While there’s really no other type of drug more effective at relieving pain symptoms of all types, opioids nonetheless carry a range of intended side effects that can be life-changing.

More than anything else, opioid drugs interfere with the brain’s chemistry in such a way as to hamper the brain’s ability to function normally. Over time, prescription opioid abuse takes over a person’s lifestyle leaving users helplessly addicted. Signs of prescription opioid abuse most often take shape within a person’s physical and behavioral make-up, becoming increasingly worse in severity the longer he or she keeps using.

Prescription opioid effects in the brain closely resemble those of heroin in terms of the chemical interactions that occur. Opioids have a chemical make-up much like that of the brain’s own endorphin chemicals, some of which include:

The roots of prescription opioid abuse lie in how these drugs alter endorphin levels. With each dose, opioid materials bind with specialized opioid cell receptor sites in the brain. Upon contact, cell sites secrete large amount of endorphins into the brain and central nervous system. These interactions set off a series of chemical interactions all of which work to slow the body’s chemical processes.

Over time, cell sites have to work considerably harder in releasing abnormally large amounts of endorphins causing eventual damage to cell structures. With increasing damage, cells weaken requiring even larger drug amounts to produce the same desired drug effects. From there, prescription opioid abuse can take on a life its own when dosage level increases continue. 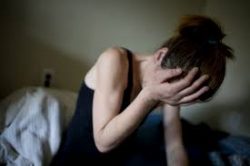 Withdrawal symptoms are a common sign of prescription opioid abuse.

Prescription opioid abuse inevitably brings on withdrawal effects as the brain starts to show signs of physical dependency. With increasing cell site damage, the brain comes to rely on opioid effects to maintain control over the body’s processes.

In cases of pre-existing medical conditions, such as diabetes and heart ailments, withdrawal effects may actually worsen any symptoms associated with these conditions. When left unattended, prescription opioid abuse can severely compromise a person’s overall health causing long-term conditions to develop.

Signs of cognitive dysfunction will likely appear early on as the repeated influx of endorphins starts to offset the brain’s normal chemical balance. Cognitive dysfunction has to do with the way a person takes in and processes information from the external environment.

In effect, opioids have a cumulative effect on overall brain and body functions, with signs of prescription opioid abuse becoming increasingly more apparent over time. Signs of cognitive dysfunction typically take the form of –

With months of continued use, prescription opioid abuse starts to take a toll on a person’s emotional stability. Opioid effects on chemical processes essentially throw the brain’s limbic system off balance.

The limbic system works in tandem with cognitive centers to produce the emotional responses that make up a person’s overall personality. Fluctuations in temperament can be expected along with extremes uncharacteristic of a person’s demeanor.

Other signs of emotional instability include –

With ongoing prescription opioid abuse, signs of emotional instability can morph into symptoms that persist and eventually become part of a person’s personality. Feeling tense and anxious every now and soon turns into days and weeks of pervasive anxiety.

These effects tie into the center of the brain that regulates the “fight or flight” or survival response. Opioid effects on brain chemical balance warp this system leaving a person in a perpetual state of anxiety for much of the time.

Like the random bouts of tension and anxiety, feelings of sadness can also build to the point where a person develops many of the symptoms that characterize a depression disorder. Symptoms commonly associated with depression include –

In actuality, it’s not uncommon for people engaging in prescription opioid abuse for months at a time to develop one or more psychological disorders as a result of growing brain chemical imbalances.

The need for increasingly larger drug doses coupled with worsening physical withdrawal effects eventually start to influence a person’s overall lifestyle, according to the Boston University Center for Psychiatric Rehabilitation. Meanwhile, a person’s functional capacity sees considerable decline making it difficult to carry out the affairs of daily life.

In general, anyone who takes prescription opioids remains at risk of abuse, though some people may be more at risk than others depending on a person’s individual circumstances. Factors that make a person more susceptible to prescription opioid abuse include –