Opiate addiction can and will have many effects on a person’s health which will become worse the longer the person abuses the drug. Opiates can be helpful when used in the correct way, but there are those who abuse and become addicted to these drugs, whether prescription opiates or illicit, street opiates. According to the NIDA, “When abused, even a single large dose can cause severe respiratory depression and death.”

Someone who overdoses on opiate drugs could die, as the drugs cause respiratory depression to the point where many individuals stop breathing. Heroin, as an opiate, can cause deadly overdose, but “deaths from prescription opioid medications now outnumber overdose deaths from all other drugs (including cocaine and heroin)” (NIDA).

The symptoms of opiate overdose are:

Opiate overdose is also very dangerous when a person is alone, as they may pass out or slip into a coma without anyone around to help them. Overdosing opiates is one of the most common and most dangerous health effects of opiate addiction. 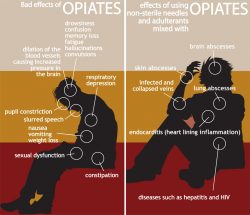 Opiate abuse can cause or contribute to a variety of health related issues.

According to Harvard Medical School, “Addicts neglect their health and safety for many reasons, including a tendency to ignore pain and other normal physical warning signs.” This can be very dangerous for the addicted individual. Because abusing opiates will change the way you respond to pain, you may become seriously injured and do nothing about it, resulting in serious health effects.

Opiates can also cause side effects which, from high doses of the drug and chronic use, can come to cause health problems for the user. Some of these physical side effects are:

Any of these side effects can cause health issues over a long period of time. Addicts will tend to ignore them in order to keep taking the drug, which is part of why an opiate addict will not usually be in good health.

In addition, addiction to heroin may also cause other health effects such as:

Opiate addiction will affect a person’s mental health as well. If someone starts out abusing opiate-based prescription medications, they might soon feel themselves building up a tolerance to them. The person might switch to abusing heroin or other stronger substances which can be very dangerous.

Opiate addicts will also deal with other mental health effects, such as:

Addiction to opiates will affect your health in almost every way, becoming worse the longer you abuse the drugs. If you believe that you are already addicted to opiates, seek treatment before these effects begin to occur in your life.