How does an Opioid Agonist Work?

For the most part, opiate drugs all interact with the same types of cell receptor sites throughout the body. Where opiates differ has to do how they interact with these sites. Most opioid agonists stimulate cell receptors, which sets off a series of chemical reactions in the brain and body.

Opioid agonists include some of the most addictive opiates on the market as well as a handful of opiate addiction treatment medications.

Most opioid agonist drugs have a slowing effect on brain and central nervous system processes. They do this by stimulating key cell receptor sites, which in turn secrete dopamine, serotonin and norepinephrine neurotransmitter chemicals. 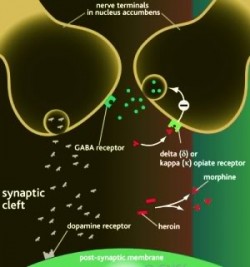 Opioid agonists have a slowing effect on the brain.

According to Macalester College, neurotransmitter chemical secretions occur whenever an opioid material binds to these cell sites. In effect, these chemical reactions affect most every bodily process, some of which include –

Agonists not only produce pain-relieving effects, but also cause users to experience feelings of calm of euphoria as secondary effects. Because of the way these drugs interfere with vital brain chemical processes, most agonists carry a high potential for abuse and addiction.

Opioid agonists essentially mimic the brain’s natural neurotransmitter chemicals in terms of chemical structure and their effects on the body. When ingested in large amounts, agonists can produce adverse effects that disrupt the body’s normal functioning. Adverse effects may take the form of –

When used in excess, the brain can quickly become dependent on agonists to the point where the body will go into withdrawal when needed amounts of the drug are lacking. Withdrawal effects may include –

Opioid agonist drugs can be separated into two groups: full agonists and partial agonists. Full agonists act in much the same way as the brain’s own neurotransmitter chemicals by fully stimulating cell receptor sites. Partial agonists stimulate cell sites in varying degrees depending on any one drug’s intended effects.

The most addictive opioid drug-types belong to the full agonist category, whereas partial agonists can actually be used as medication therapies for treating opiate addiction. Some of the addictive full agonist drugs include –

Partial agonists used in the treatment of opiate addiction include –

Methadone, a full agonist drug, is also used as a medication therapy for opiate addiction treatment. In effect, methadone, Suboxone and Subutex have a controlled-release effect that greatly reduces their addiction potential. In the process, recovering addicts gain considerable relief from withdrawal and drug cravings.