The Effects of Opiate Dependency

Opiates are not only powerful painkillers but they are also extremely addictive, which causes a vicious cycle of addiction, opiate dependency and tolerance to occur in a person’s life. Abusing opiates produces a euphoric feeling to form throughout a person’s body and this feeling is highly pleasurable for most people. Furthermore, an individual high on opiates will feel sedated and apathetic to the world around them which can cause changes to their behavior.

Opiates impair a person’s judgment and decision making skills and cause many people to become inactive and lazy. A person who forms an addiction to opiates will usually suffer with financial loses, relationship loses and poor physical health.

Opiate addiction usually leads to opiate dependency as well as the person’s tolerance levels to increase. When a person becomes dependent on an opiate drug they will feel extremely sick if the drug is not in their system. Furthermore, as a person continues to abuse an opiate drug, whether or not they are dependent on the drug, their body will build a tolerance to the opiate, resulting in them needing to take more of the drug.

According to the Pain Research Center, tolerance to opiates is when a person needs to increase their dosage of the drug to maintain pain relief. The first indication that their body has formed a tolerance to the drug is a noticeable decrease in the length of time the drug stops pain from occurring. 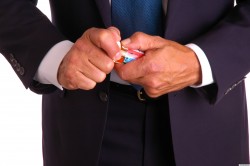 If you are starting to rely on opiates and need them to go through your daily functions you may be growing dependent.

If a person begins to feel sickly or extremely fatigued and anxious when they do not have opiates in their system they may be developing a dependency to the drug. Common physical and mental withdrawal symptoms a person may experience from opiates include, nausea, excessive sweating, runny nose, tearing of eyes, insomnia, anxiety, rapid mood swings, excessive vomiting, diarrhea, uncontrollable shaking, Goosebumps, and muscle aches.

If a person is experiencing any of these symptoms because they did not take an opiate drug that they commonly take, then their body has developed a dependency to the drug and they should get help from a treatment program if they decide to continue to take the drug despite of the consequences.