Many harmful effects of opiates have been discovered yet despite the dangers of using these drugs, millions of people continue to fuel their addiction by using heroin, prescription painkillers or other opiates on a regular basis.

Immediately after an opiate is used the individual will begin to show signs that the drug is affecting the body. The pupils may become dilated and the user will often become drowsy or otherwise show signs of feeling tired. Often times, these short term effects of opiates will wear off within a few hours and do not require any immediate attention, but in the event that the user shows signs of opiate overdose, immediate medical care is necessary to ensure safety.

Injecting opiates can lead to a much quickly bodily response and additional short term effects. Opiates tend to make the user feel euphoric at first, increasing body temperature and creating dry mouth. As the drug continues to work its way through the body, the user will feel heaviness in the limbs and may have difficulty with motor function. 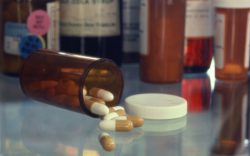 There are many different harmful effects of opiates.

This state of drowsiness and an inability to control motor function will wear off as the drug begins to taper off and the user will then feel alert and awake once again. Many users then feel very anxious and resort using opiates again in an effort to feel the short term effects of the drug once again.

Unfortunately, using opiates over and over again will lead to many long term effects and can result in tolerance as well as physical dependence. Progressive use of heroin, prescription painkillers or other opiates is likely to have a number of lasting effects on the user that do not go away even with sustained abstinence from the drug use.

Long term damage to the body can result from successive use of opiates. Many long term effects of opiates tend to stick around long after the user makes a decision to get sober and to stay clean. Liver damage, kidney damage and organ failure are all potential side effects which can occur if an individual continues to use opiates for a prolonged period of time and does not seek professional help for addiction.

Injecting opiates, especially pills or heroin, can lead to boils, abscesses or other skin disorders. There is also the risk of collapsed veins and immediate death as a result of overdose. Permanent damage can occur if the veins become inflamed as a result of injecting drugs into them and this can lead to major infections that result in a need for limb amputations.

Continued use of opiates will increase tolerance to the drug resulting in the user having to take more and more in order to produce the same effects. Tolerance can become a costly long term effect of opiate use but it is also a very dangerous effect. Users think that they need to take more of a drug and as a result often overdose in an effort to feel the high that they felt when they first started using the drugs.

Addiction harmful effects of opiates revolve around the lack of personal hygiene, risky behaviors and lack of self control that comes from opiate abuse. Individuals who continue to use opiates are likely to neglect their appearance, pay less attention to hygiene and could suffer serious health consequences related to a lack of desire to take care of one’s self.

Risky behaviors are always a problem with opiate abuse and can have additional hazardous effects on the user. Sharing needs or straws used to inject or snort drugs can lead to the sharing of diseases such as HIV, AIDS, Hepatitis and other STDs. Promiscuous activity that takes part when under the influence of opiates can also have a devastating impact on the user and the negative side effects of such activities may not go away.

If you or someone you love is addicted to opiates or uses opiates on a regular basis, it’s important to consider the many harmful effects of opiates on the body, the personality, the psyche and on others. Sustained opiate use leads to broken relationships, ruined finances, lifelong health complications and a wealth of other problems that cannot always be overcome. In the worst cases, the harmful effects of opiates can be so damaging that the user actually dies as a result of complications that arise from sustained opiate use.