Using and abusing opiate drugs during pregnancy can be potentially dangerous to both the pregnant woman and the unborn child. According to the NIDA, “Regular (e.g., several times a day, for several weeks or more) or longer term use or abuse of opioids can lead to physical dependence and, in some cases, addiction.” These issues can be very dangerous for anyone and especially so during pregnancy.

January is National Birth Defects Awareness Month, and it is important for pregnant women and women who are hoping to potentially become pregnant to understand the dangers associated with opioid abuse and use (whether prescription or illicit) when it comes to the potential for birth defects and other issues. 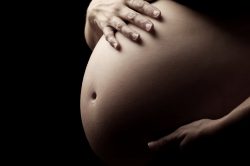 Taking opioids while pregnant is harmful to your unborn child.

According to the NLM, the users of prescription painkillers need to make their doctors aware if they become pregnant or are hoping to become pregnant. This includes most prescription opioids like oxycodone, fentanyl, hydrocodone, hydromorphone, codeine, etc. The NLM states, “If you take oxyocodone extended-release tablets regularly during your pregnancy, your baby might experience life-threatening withdrawal symptoms after birth.”

Patients who are pregnant should be warned about the potential of this effect on their child, as prescription painkillers can cause a dangerous withdrawal syndrome in infants who have been exposed to them before birth, one which can end in death if not properly treated. The symptoms of this syndrome are:

While some of these symptoms are different from those exhibited by adults going through opioid withdrawal, those symptoms which are similar could be much more potentially harmful when experienced by a young child.

The CDC has stated that there are other issues associated with the use of prescription opioids to treat women who are pregnant and the possible birth defects that can be caused. According to the study, “treatment with opioid analgesics was linked with the following birth defects”

These potential birth defects are possible in regular and long-term use of prescription opioids as a treatment method for pregnant patients. Among them all, the heart defects are most devastating and can contribute to the possibility of infant morbidity and mortality. The CDC states, “When making treatment decisions… it is important that women and their doctors weigh the benefits of opioid analgesic medications along with their potential risk for birth defects.” However, the abuse of any opioid drugs holds an even higher potential risk for both the pregnant woman and her child.

Abusing Heroin and Other Opioid Drugs During Pregnancy

Abusing heroin is one of the most dangerous things you can do during pregnancy. It is extremely dangerous for both the fetus and the pregnant mother and is usually a sign of addiction which means that pregnant individuals need treatment in order to stop and likely won’t be able to stop on their own.

The NLM states, “Using illegal drugs [during pregnancy] may cause underweight babies, birth defects or withdrawal symptoms after birth.” Heroin use can cause all the same withdrawal symptoms in babies who are born after being exposed to opioid drugs in the womb, and visual defects (strabismus) have also been found in higher numbers in those children who were exposed to heroin (DHS).

Low birth weight and complications like premature labor are common among pregnancies that involve heavy heroin use. In addition to these issues, many individuals who abuse heroin put themselves at risk of acquiring HIV/AIDS, hepatitis, and other diseases that can be transmitted through risky sexual behavior or the sharing of needles. These diseases can be transmitted from mother to child, causing even more issues for both.

There is also the potential for other dangerous effects associated with heroin use during pregnancy which can lead to birth defects, harmful issues that must be treated after birth, and even death.

Any time a pregnant woman abuses drugs of any kind (whether they are prescription-based or not), she is putting herself and her child at risk. It is never safe to abuse drugs while you are pregnant because the results can be both dangerous for you and the fetus. Still, if a woman who is pregnant is addicted to heroin or another type of opioid drug, it is generally agreed upon that the best course of action remains attending treatment and receiving opioid maintenance medication with either methadone or burprenorphine.

Are Opiates Always Dangerous During Pregnancy?

In some cases, it might be beneficial for a woman to take opioid drugs during her pregnancy. If she is addicted to opioids, it will be better for her to be maintained on the drug instead of merely trying to quit which can lead to severe withdrawal symptoms during her pregnancy and, often, relapse. However, maintaining the pregnant patient on methadone or buprenorphine has its drawbacks as well, and the patient and doctor should decide on the best course of action with both parties informed.

The potential for birth defects, obstetrical complications, and other issues like the transmitting of dangerous diseases is higher with illicit and prescription opioid abuse than licit and monitored prescription drug use. But there is always a danger when introducing possible teratogens (substances that could be harmful to a fetus) into a pregnant person’s system. In most cases, it should only be done when necessary and when it is the best course of action as decided by the patient and the doctor.

Like all substance abuse, the abuse of opioids during pregnancy are dangerous. Make sure to remember the possible birth defects that can be caused by this as well as the ways to possibly avoid more severe complications.