Clonidine is a drug in the medication class of centrally acting alpha-agonist hypotensive agents, according to the National Library of Medicine. It is often used as a medication to treat high blood pressure, but it is also the most common pharmacological treatment for opioid withdrawal (as well as several other withdrawal syndromes). It is not, however, a full method of treatment for addiction itself.

The drug not only is the leading medication for opioid withdrawal, but it can also be used to treat alcohol withdrawal and as “an aid in smoking cessation therapy.” Because of clonidine’s calming effects on the body, it helps to minimize many of the symptoms commonly experienced during withdrawal, such as:

Though it can sometimes increase the amount of diarrhea, nausea, and vomiting one would experience during withdrawal, these symptoms can often be minimized with another medication. Clonidine is very effective in treating many withdrawal syndromes, and as such, is still used more commonly for this purpose than any other drug, including methadone and buprenorphine.

However, the National Institute on Drug Abuse states, “Treating withdrawal is not the same as treating addiction,” and medically-assisted detox, or the process of managing withdrawal symptoms while the individual becomes less and less dependent on the drug, is only the beginning of the addiction treatment process.

Why Is Clonidine Not a Treatment for Addiction? 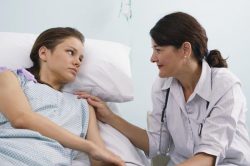 Clonidine is an exceptional medication for minimizing withdrawal symptoms from alcohol, opioids, and nicotine, but it does not itself treat addiction. First and foremost, this is because it cannot manage the cravings caused when addicted individuals attempt to stop abusing their drug of choice. These cravings instead can be decreased with certain pharmaceuticals for different substances (such as methadone and buprenorphine for opioids, nicotine replacements for nicotine, and naltrexone and acamprosate for alcohol).

Clonidine is also not an official treatment for addiction because, as stated previously, going through detox is not the same as going through addiction treatment. If a person successfully ends their dependence on a drug, this can be wonderful, but it does not mean their addiction is gone. Addiction is a compulsive need to seek out the drug, whereas dependence often occurs when any habit-forming drug is taken over a long period of time, even under a doctor’s care.

In the first stage of treatment, or during medically assisted withdrawal, clonidine can be very beneficial. However, sometimes patients who are severely dependent on opioids need a stronger substance even during withdrawal, and as stated by the Substance Abuse and Mental Health Services Administration, methadone may be needed for opioid withdrawal treatment in this case. As part of the same issue, other drugs may be needed to treat serious dependence or intense withdrawal symptoms, such as benzodiazepines for alcohol withdrawal, etc.

Clonidine is effective in treating certain levels of withdrawal during the first stage of addiction rehab, also called detoxification. But one should never count on this medication to treat their entire addiction syndrome because it would not be effective for this task.