What are the Most Common Hydrocodone Street Names?

Hydrocodone, a synthesized derivative of codeine, was first developed in the 1920s as an alternative to codeine for treating pain symptoms. In spite of its pain-relieving properties, hydrocodone still carries a high potential for addiction. Like most all addictive opiate drugs, hydrocodone has made its way into the underground drug culture. 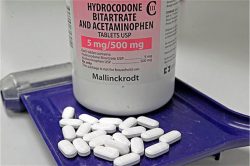 Hydrocodone is a commonly prescribed painkiller.

Compared to other opiate-based drugs, hydrocodone exists as the most frequently prescribed pain reliever in the U. S., according to the U. S. Drug Enforcement Administration. Not surprisingly, it’s the most abused and heavily trafficked prescription opiate on the market.

Hydrocodone most resembles morphine in its effects on the body. It’s also used as an antitussive or cough suppressant agent that’s comparable to codeine in effects.

In total, 100 different brand name drugs contain hydrocodone in one form or another. Likewise, hydrocodone street names reflect the types of effects any one drug produces as well as the type of drug it is (cough suppressant vs. pill).

Drugs that carry hydrocodone street names more than likely belong to the Schedule II or Schedule III class of controlled substances. As far as abuse and addiction potential go, Schedule II and Schedule III class drugs rank second and third as the most addictive drugs out of a total of five distinct drug classes.

When prescribed, hydrocodone comes in tablet, capsule and syrup forms. Both tablet and capsule forms produce a time-release mechanism that delivers the effects of the drug over a designated time period. Most hydrocodone products also contain a secondary, non-opiate agent, such as ibuprofen, acetaminophen or aspirin.

Abuse practices entail crushing tablets and capsules into a powder so it can be snorted or injected in solution form. When ingested in powder or solution form, users can override the time-release mechanism and experience the full effects of the drug all at once.

Street names for hydrocodone cough suppressants reflect the type of method used when ingesting these drugs. Tussionex, a hydrocodone-based cough suppressant, may be referred to as “Tuss.” Users may also use the phrase, “sippin’ on syrup” when talking about getting or using the drug.

When abused, cough syrups produce a numbing effect that incites feelings of euphoria as well as sedation. Other street names related to cough syrup abuse include –

With so many brand name prescription drugs to choose from, hydrocodone street names can take any number of forms. Hydrocodone-based prescriptions drugs most often abused include –

Likewise, street names for these drugs may include –

Armed with this information, parents, families and friends are in a better position to identify hydrocodone abuse behaviors in a loved one.