Morphine is a highly addictive, dangerous drug that is often prescribed to patients who are suffering from severe pain associated with cancer or serious injury. This opiate is often abused on the streets by users who are addicted to opiates and in seek of the prolific high that comes from repeated use and abuse. Unfortunately, morphine street names such as Miss Emma and Ms. Em allow users to openly discuss the drug in front of others without really giving way to the fact that they actually talking about drug use.

Many of the morphine street names that users openly use are related to the color of the pills when morphine is prescribed. Generally, the pills are available in red, blue or black; the colors vary based on the level of the active ingredient found in the medication. As such, morphine street names often refer to “black mollies” or “black pill” and similar versions of lingo that do not openly state morphine but those who regularly abuse the drug on the streets of course know the lingo and are on the same page. 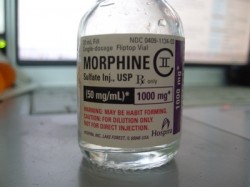 Slang names for morphine usually relate to characteristics of the particular morphine prescribed.

Often times, liquid morphine is prescribed to patients who have difficulty swallowing pills. According to the DEA, many morphine street names such as “Gods Medicine” or “Aunti” may refer to either the liquid morphine or to the pills. The following street names for morphine describe liquid form:

Morphine street names are often used interchangeably or with street names that describe other opiates such as Roxanol or Demerol. This is because many people who abuse morphine will happily accept Demerol or similar drugs in the place of the morphine if such cannot be found at the time when they are wanting to get high. You may hear any of the following street names for morphine:

Really, the number of potential street names for morphine is only limited to the user who is trying to discuss the drug around others. Unfortunately, when teens and adults alike are talking about drugs, they can be very creative and may be openly discussing potentially deadly drugs and activities around you when you don’t even realize it.