According to the 2015 World Drug Report compiled by the United Nations Office on Drugs and Crime, limited information indicates there are 16.5 million opiate users worldwide, or .7 percent of the world’s population. In some ways, that may not be surprising because opiate use that continues for as small a period of time as a few days can lead to dependence.

If you find yourself waffling between continuing your opiate use and seeking treatment, it’s important to be honest with yourself and that means confronting the good, the bad, and the ugly aspects of opiate addiction.

Many users (both past and present) will argue that the best part of an opiate addiction is the drug use, and that’s worth exploring. Addiction to opiates is all about highs and lows. The initial highs create a euphoria that surpasses what can be created naturally and that can feel good. When the drugs wear off, users return to feeling normal and that’s seems good because there don’t seem to be any drawbacks or consequences. But, those feelings don’t last. The feeling of euphoria diminishes and it becomes hard to get back to normal without the opiates. So, although one can argue that opiate use feels good, it doesn’t feel that way for very long.

The only truly redeeming part of an opium addiction is that it can be managed. In 2012, of the 1,375,146 people seeking drug treatment in the United States, 42.6 percent were opiate and opioid users. There is a will to succeed among opiate users and many of them are successful. Part of success comes from finding the right treatment type and setting. If you are ready to seek treatment, call Opiate.com at 800-584-3274 Who Answers?  and get the process started. 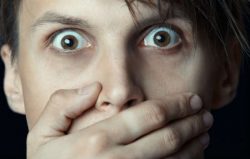 Long term opiate use can damage your teeth.

Treatment and sobriety are excellent goals. The bad? They are not easy. Of the total number of North Americans entering treatment for opioid addiction, only 22 percent were first time entrants. On one hand, it may seem depressing that so many people in treatment have done it before and need to do it again, but relapse isn’t failure. In fact, it is a normal part of the recovery process and a good treatment program will have steps in place to help participants get back on track.

All of these steps present their own challenges, but detox tends to be the step most feared because an opiate user develops a tolerance over time and cutting off a body dependent on large doses is intimidating. Stopping opiate use does cause some painful consequences, including:

Yes, these sound terrible, so why isn’t detox in the ugly section? Because major withdrawal symptoms peak between 24–48 hours after the last dose and disappear after about a week. You can deal with them and remain on track to complete sobriety.

Without treatment, things will get uglier and uglier as time goes on because opiate addiction is—and will remain—a dangerous situation that brings with it a high risk of adverse effects and possibly deadly consequences.

The Foundation for a Drug Free World identifies the following as effects of long-term use:

The worst consequence of long-term use is death. Even though the number of opiate users has remained stable over the last few years and has not gotten larger, that isn’t positive news because the number of deaths has increased; the 2015 World Drug Report finds: “Mortality rates have nearly tripled from 1.0 to 2.7 heroin overdose deaths per 100,000 of the population between 2010 and 2013; this reflects an increase in the number of heroin-related deaths from 3,036 to 8,527.” Yes, treatment is hard, but life without treatment is worse and can end quickly.

There are definitely bad and ugly aspects of opiate use, but finding the right type of treatment and help can help your focus stay on the good. For assitance finding your way from the ugly to the good, call Opiate.com at 800-584-3274 Who Answers?  and speak to someone who is waiting to help you.