What is the Normal Opiate Detox Protocol?

For the most part, the opiate detox process works to undo some of the damage done by long-term opiate abuse. The main objective of opiate detox centers on helping a person stop opiate use altogether, which involves treating the drug cravings and withdrawal effects that develop during the detox stage. A normal opiate detox protocol applies for people who show clear signs of opiate dependence.

Assessing a person’s condition in terms of the severity of the addiction, his or her physical health and psychological status determines what type of treatment will work best. In most all cases, medication therapy treatments also play a big role in helping ease withdrawal symptoms.

Standard treatments for opiate detox follow a set protocol, mostly because of the use of medication therapies during the detox stage. Methadone, the most commonly used treatment drug, falls under federal regulation as a Schedule II narcotic drug. Federal regulations dictate the conditions under which a person can receive detoxification treatment whenever a medication therapy uses methadone or a drug like it.

According to the National Center for Biotechnology Information, grounds for detoxification treatment address the types of signs and symptoms that must be present in order for opiate detox to be warranted. Some of these signs include: 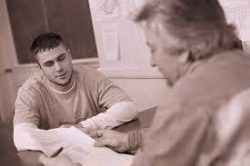 The first part of an opiate detox is an assessment.

Opiate detox leaves the body in a drug-free state, which puts an almost immediate strain on brain and body functions. As the body works to compensate for the absence of the drug, a person naturally experiences uncomfortable withdrawal effects.

Without opiate detox treatment, withdrawal effects can make the detox stage unbearable for people who attempt it on their own. For these reasons, opiate detox protocols focus on helping recovering addicts cope with the changes the body goes through during the withdrawal process.

Ultimately, medication treatments used during opiate detox aim to eliminate withdrawal effects and drug cravings, at which point medication doses are gradually reduced. As both medical and psychological problems often develop from long-term opiate use, needed treatments for these conditions are also determined during the assessment process.

Opiate detox protocols call for certain types of medication therapies specifically designed to treat withdrawal symptoms and reduce drug cravings. While methadone is the standard when it comes to opiate addiction treatment, other newly developed medication therapies may also be considered. Other medications used include:

Buprenorphine and methadone are both synthetic opiate medications capable of imitating opiate’s effects on the body. Naloxone rather eliminates a person’s desire for opiates by muting opiate effects. Clonidine, a non-opiate-based medication, treats some withdrawal symptoms but does nothing along the lines of reducing drug cravings.

As withdrawal effects and drug cravings lessen, a person may be switched from one medication therapy to another or tapered off of medication treatments altogether.