Opiates comprise a wide spectrum of drugs, most all of which are known for their pain-relieving effects. From simple muscle aches and pains to chronic pain-related conditions, drugs on the opiates list address most every type of pain symptom a person can experience. 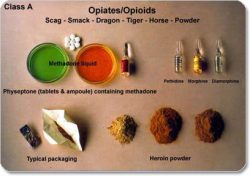 Opiates all stem from the opium poppy seed plant.

The fundamental chemical structure for the vast number of opiate drugs in existence comes from one single plant: the opium poppy seed plant. According to Princeton University, the opium poppy seed plant contains in excess of 50 different alkaloids or organic compounds known to produce certain effects in the body. Of these 50 alkaloid compounds, 25 of them carry pain-relieving properties.

The human body contains its own opiate system made up of cell receptor sites located in the brain, central nervous system and gastrointestinal tract. These sites secrete endorphin-like chemicals that work to modulate pain sensations throughout the body.

In terms of chemical structure, opiates and the body’s endorphin chemicals bear a striking similarity, which accounts why opiates work so well at relieving pain symptoms. Most all drugs included on the opiates list interact with the body’s cell receptor sites in the same way.

The natural drugs contained on the opiates list come from the alkaloid materials found in the opium poppy seed plant. Natural opiate drug types include –

Technically speaking, only natural opiates quality as actual opiate drugs; however, any drug derived and/or synthesized to act as an opiate material falls within the opiates list.

Natural alkaloids used in the making of semisynthetic opiates include –

In effect, the ability to manufacture opiate-like drugs has greatly contributed to the number of pain treatment options available.