From heroin to prescription pain pills, the opiate epidemic of the 21st century continues to thrive, gaining momentum with each passing year. With long term opiate use, the effects of these drugs on the mind and body disarm a person’s sense of right and wrong leaving him or her hopelessly addicted to opiate effects.

Getting help for long term opiate use starts with understanding the degree of damage opiates leave behind, then determining what level of treatment best addresses a person’s treatment needs. Long term opiate use creates both physical and psychological dysfunction. Ultimately, the longer a person uses opiates the more comprehensive treatment must be to weed out addiction’s effects.

Opiates, in general, belong to the Schedule I and Schedule II classes of narcotic substances, both of which carry a high potential for abuse and addiction. Part of the reason for this has to do with opiates sharing a similar chemical make-up with the brain’s own neurotransmitter materials. In effect, opiates easily integrate within the brain’s system because of these shared characteristics. 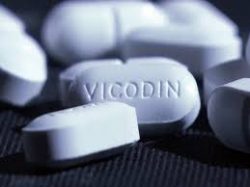 It is easy to become dependent on opiates like Vicodin.

Whether derived from natural plant compounds or synthesized in a lab, opiate compounds find their way inside the brain’s opioid system, which manages pain sensations throughout the body. According to the Journal of Clinical Investigation, long term opiate use infiltrates the brain’s normal operations and commandeers this system. Before long, the brain’s ability to regulate chemical systems throughout the body becomes totally dependent on opiate effects.

The physical effects of long term opiate use develop gradually as the brain’s tolerance for the drug increases. Tolerance level increases result from the drug’s damaging effects on the brain cell sites responsible for secreting neurotransmitter chemicals.

With each drug dose, these cells produce massive amounts of chemicals and so undergo gradual structural damage with ongoing use. After a certain point, the physical effects of long term opiate use disrupt the body’s major systems. Systems most affected include:

Consequently, disruptions in these systems account for the withdrawal effects commonly experienced with long-term opiate use. Getting help for long term opiate use starts with addressing the physical effects of the drug.

Opiate effects on brain chemical pathways inevitably impair the brain’s cognitive and emotion-based functions, both of which dictate a person’s psychological status. With long term opiate use, chemical imbalances reach a point where the brain’s actual structures and chemical pathways take on a new configuration.

These conditions set the stage for serious psychological dysfunction to develop. Long term users start to experience declines in cognitive and emotional function, including:

Under these conditions, long term opiate use makes it extremely difficult to hold down a job or run a household.

According to Semel Institute, treatment for long term opiate use can vary depending on a range of factors, including:

A person’s overall condition will likely dictate which course(s) of treatment will work best. As long term opiate use can greatly impair a person’s ability to function in daily life, some people may require long-term maintenance treatment to fully overcome the effects of the drug in their lives.

Someone engaging in long term opiate use will eventually develop an addiction. While addiction ultimately becomes the biggest obstacle to stopping drug use, the physical aftereffects of opiate abuse can pose an even greater challenge during the early stages of recovery.

The damage done to brain cell functions can persist long after a person stops using. As a result, the brain can’t function normally without some form of physical support. For these reasons, medication replacement therapies offer long-term addicts the best chance of overcoming opiate aftereffects.

Medication replacement therapies mimic the effects of addictive opiates, and over time help to wean the brain off opiate effects. Medications commonly used include:

More oftentimes than not, people coming off long term opiate use require some form of medication treatment in order to maintain abstinence for any length of time.

The reward system determines what motivates a person throughout the day based on the types of positive reinforcement received. Positive experiences trigger the release of dopamine, one of the neurotransmitters affected by opiates.

Dopamine acts as the primary neurotransmitter within the brain’s reward system. With long term opiate use, this system comes to depend on opiate effects much like the rest of the brain and body do.

Once addiction takes hold, getting and using drugs becomes a person’s sole motivation from day-to-day. Someone in this state will develop a set of habits, routines and eventually an entire lifestyle that revolves around drugs.

By far, treating the psychological effects of long term opiate use constitutes the biggest challenge a person faces in recovery.

The tolerance level effects brought on by long term opiate use pose serious risks to a person’s overall physical and mental well-being. According to a Centers for Disease Control & Prevention, deaths resulting from opiate overdose exceed those of all other drug types.

Ultimately, brain tolerance levels will keep increasing for as long as a person keeps using For these reasons, the sooner a person gets needed help for long term opiate use the better.