Is Suboxone an Opiate?

‘Is Suboxone an opiate?’ is a difficult question to answer without understanding all of the facts. Suboxone, contains a chemical called Buprenorphine which, according to the Substance Abuse and Mental Health Services Administration, is an opioid. Unfortunately, there is no simple answer to if Suboxone is an opiate. If you are going by the strict definition of an opiate, then no it is not. If you are going by the general term for all drugs that contain opiates or opioids then yes it is. Therefore, the answer is yes and no. To explain this you have to know the difference between an opiate and an opioid and understand what exactly Suboxone is before you know how Suboxone is classified and why.

The Difference between an Opiate and Opioid Drug

Opiates are a natural products derived from the opium poppy. This is a form of poppy that grows in Asia. When it is harvested, workers split the seed open and allow the sap to drain out. They drain it onto a flat surface and allow it to dry. Once it is dry, they scrape that off and that is what opium is. Sometimes it is later refined into a powerful painkiller named morphine.

When someone takes an opiate, the drug binds to the opioid receptors in the brain. This causes a flood of dopamine in the system and results in euphoria and other pleasurable feelings.

Opioids are synthetic products based off the opium poppy. Since they are synthetics, they are created in a lab much like acrylics and other synthetic materials. Heroin is a common synthetic created from morphine. Synthetics are synthesized from natural materials, in this case the naturally occurring opiate acts as a guide.

Suboxone is an opiate and opioid addiction replacement drug. Since opiate addiction damages the opioid receptors that it binds to, by replacing the opiate in these receptors it blocks the opiate from taking effect. This prevents many of the symptoms of opiate withdrawal and helps with chronic pain. Many of people addicted to opiates are addicts because they suffer from chronic pain and take opiates to relieve it.

Naloxone is a drug that reverses the opiate effects. It is often used by itself to stop overdose and catalyze withdrawal. It sends someone who takes it into instant withdrawal. The combination of both Buprenorphine and Naloxone prevents withdrawal and prevents abuse of the Suboxone.

In some respects, Suboxone does act like an opiate. They have many of the same effects. According to Reckitt Benckiser Pharmaceuticals Inc., the manufacturer of Suboxone, the effects of this drug are:

These side effects are very similar to those experienced when taking opiates.

Although it is possible to abuse Suboxone, it does not produce the same effects as an opiate or buprenorphine by itself. Manufacturers tried to lessen the abuse potential by adding Nalaxone to the drug. Most of the time, the Naloxone prevents the normal euphoric effect, so no matter how much you take, you cannot get any higher than the highest dose of the drug.

How do you Take Suboxone?

According to the National Institute on Drug Abuse, Suboxone is normally taken in an outpatient setting. This is one of the advantages it has over other drug replacement therapies. Because of its low potential of abuse, many doctors consider it safe for a more relaxed treatment.

The first step to taking Suboxone is to find a qualified doctor to prescribe it. Only doctors who have authorization can do this. Once you find a doctor, the doctor will evaluate your addiction needs and prescribe the initial dose. After that, the doctor will adjust the dose depending on your reactions and withdrawal symptoms. Some doctors choose to start at a low dose and move higher while others start low and move up or down accordingly. 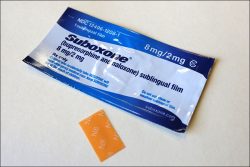 You should not take Suboxone if you are still taking other opiates. The Naloxone in Suboxone will cause you to go into an immediate withdrawal. It is also dangerous to combine opiate medications. Since the Naloxone cancels out other opiates, taking them while on Suboxone is pointless and will most likely make you ill.

Technically Suboxone is an opioid, which means it is synthetic. It is important to remember that some doctors refer to both opioids and opiates as opiates and do not differentiate between the two. You might hear Suboxone called an opiate because of this.

Regardless of what the technical terminology is, Suboxone is a drug proven to be effective in combating the symptoms of opiate withdrawal. If you are addicted to opiates, it is an excellent alternative to methadone and buprenorphine alone. The first step to Suboxone treatment is to talk to your doctor.