Chronic pain is a public health problem that costs billions of dollars each year, according to the American Academy of Pain Management. More people live with pain than diabetes, heart disease and cancer combined. The rise in chronic pain suffers has given way to another public health concern – dependence on narcotic pain relievers known as opiates.

What is an Opiate?

Opiates are a classification of drugs derived from the poppy seed. In the 19th century, Dr. Albert Schweitzer discovered that one of these drugs, morphine, could eliminate the pain in his patients. That discovery led to a long list of natural, semi-synthetic and synthetic drugs made from this same base compound.

Today, physicians use opiate drugs to help their patients manage both acute and chronic pain from disease and injury because they work. The downside to this trend is the escalation of abuse of opiate drugs.

Opiates attach to protein receptors to mask pain and create a feeling or euphoria. That high makes them popular as a street drug, as well.

Opiates are extremely addicting. It is estimated that 23 percent of those who use an opiate drug will become addicted. The body builds up a tolerance to the drug, so it becomes less effective the more you use it. To get the same effect, the user must take more and more over time. Soon, it becomes impossible to feel good without the drug.

This physical dependence means withdrawal if the user stops taking it, as well. The withdrawal can be brutal. Withdrawal systems include:

The sick feeling that comes on the cusp of withdrawal is enough to keep some people taking the drug despite the consequences.

Dependence is not the same thing as addiction. Addiction is defined by behavior. A person who is addicted to an opiate will do anything to get the drug, such as steal or lie. They allow the need to take over their lives. Physical dependence is part of addiction, but not all people dependent present with the drug-seeking behavior of addiction, such as doctor shopping to get prescriptions from more than one source.

The key to safe pain management with an opiate drug is to follow the doctor’s instructions. Although, there are no guarantees, the dosage and schedule are designed to reduce the side effects and lower the risk of addiction. Opiates are strong and abusing them can lead to overdose.

It helps to know more about each type of opiate, as well, to understand which drugs are the most addictive. Avoiding these particular drugs may lower your risk of addiction or relapse if you have a history of substance abuse. 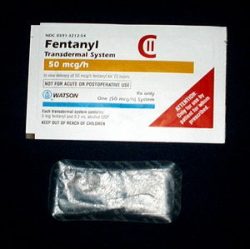 Fentayl is a highly addictive opiate.

Fentanyl is a potent, synthetic analgesic prescribed for severe pain. It is available as a patch, lozenges, tablet, nasal spray and lollypop. Fentanyl is 100 times more potent than morphine.

Butorphanol is a generic drug sometimes prescribed to manage migraines. It is available in injectable form and as a tablet but is most often issues as an intranasal spray.

OxyContin, or oxycodone, is a semi-synthetic opiate prescribed to relieve less severe pain. It is also a popular street drug called Hillbilly Heroin.

Demerol isn’t as widely used today as it once was because it is more addictive than originally thought. Demerol is often used in labor and to treat some intestinal conditions such as diverticulitis.

MS Contin is time-released morphine used to treat chronic pain. It comes in various tablet doses ranging from 30 to 200 mg or as a suspension. The time-released formula means one dose lasts for 12 hours.

Percocet is the brand name for the combination drug of oxycodone and acetaminophen. It has been associated with acetaminophen overdoses, as well as addiction.

Heroin is mostly known for its street value, but it does come in pharmaceutical grade, too. Medical heroin is sometimes used for acute pain from severe trauma or end-stage cancer. In some countries, it is applied in opioid replacement therapy to wean those with an addiction off drugs.

Dilaudid, or dihydromorphinone, is a potent analgesic derived from morphine. It is used both medically and recreationally. Dilaudid is a fast-acting drug and more water-soluble than morphine. It can be taken orally, intravenously, rectally and sublingually.

If you suffer pain, whether it is acute or chronic, an opiate pain reliever is powerful medicine. The risk of addiction is there when you take these drugs for more than just a couple days or if you abuse them. If you need pain relief, follow the doctor orders to take all meds properly and avoid some of the risks. If you do feel dependent on an opiate, the sooner you ask for help, the easier it will be to be free of the drug.