Which Opiates are Illegal?

According to the Government of South Australia, “Opioids can be highly effective for the treatment of pain, although there is a high-risk of adverse effects and potential for dependence when not used appropriately.” This is why most opioid-based drugs are Schedule II, III, or VI in the United States, which means they have some medical use but can have a high potential for illegal abuse. But which opiates specifically are illegal?

Heroin is a semi-synthetic drug made from morphine. It can be found as “a white or brown powder or a black, sticky goo” (National Library of Medicine). It was originally synthesized by the pharmaceutical company Bayer and was believed to be less addictive than morphine. Over time, it was found that heroin is extremely addictive and was set as a Schedule I drug in the United States, meaning it no longer has any sanctioned medical use.

Any use of heroin is dangerous and illegal, and the drug is also illegal to buy and sell. Unfortunately, the drug is much cheaper and easier to obtain than many prescription opioids, so addicts often abuse heroin for these reasons. 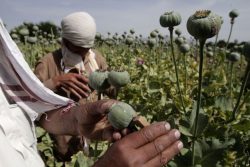 Opium and heroin are illegal and highly addictive drugs.

Although opium is a Schedule II narcotic, it does not have any medical use at this time and would be considered illegal if it was in a person’s possession for recreational use. Unlike heroin, it is much more difficult to obtain pure opium, but there are still some people who abuse it illegally.

According to the Drug Enforcement Administration, “Opium is… abused in combination with other drugs” very often, and there are a number of specific terms for how the drug is abused and which other substances are used with it. Opium is a dangerous drug, even though it is natural, and users often become addicted very quickly.

Prescription opioids, such as morphine, fentanyl, oxycodone, hydrocodone, codeine, etc., are mostly Schedule II through IV because they can be used medically to treat pain, cough, and other issues. However, if a person buys, sells, or uses these drugs in any way other than they were prescribed to, they are committing an illegal act. This is because medicinal opioids are only meant to be taken through a doctor’s prescription and the moment someone uses them differently, they are abusing the drug. This can include:

Because opioids are so addictive when abused, any use of them that is recreational or otherwise not directly prescribed is illegal. In addition, using heroin or opium is also illegal because these drugs no longer have a sanctioned medical use. It is very important to avoid this kind of dangerous drug use, not only because it is illegal, but also because it can cause serious addiction. If you have been abusing opiates of any kind and need help, call 800-584-3274 Who Answers? .