Prince Rogers Nelson, the musician known simply as Prince, was found dead in his Paisley Park recording studio on April 21 of this year. Prince’s friend Kirk Johnson, his personal assistant Meron Bekure, and an addiction specialist stumbled upon the artist unresponsive in an elevator. The police were immediately called, but later reports indicated Prince had been dead for six hours before the discovery of his body.

When the news hit the public, there were as many theories about his death as there were people grieving. Everyone has a slightly different version of what must have happened. The first related detail released was that the pop star’s plane made an emergency landing in Moine, Illinois the week before his death. The media reported that he was treated with Narcan, an opioid antidote, at the local hospital. It was this incident that caused those close to the star to call in an addiction specialist.

Ultimately, it was revealed that Prince had suffered an overdose of the powerful opioid fentanyl. Like so many other Americans, the artist was treating his chronic pain with a chemically synthesized opioid medication.

He was not alone in overdosing. In fact, 2014 was distinguished as the year with the highest number of drug overdose deaths on record.  The Centers for Disease Control and Prevention (CDC) report six out of every ten deaths were caused by an opioid overdose.

Perhaps, this event can serve as the genesis for an important conversation about opioid overdose caused by prescription painkillers. What follows is a discussion of the dangers posed by fentanyl and other, similar drugs and some solutions that could have saved Prince and can save you from death.

If you have a problem with fentanyl or another opioid, you are placing yourself in danger. But, addiction is so powerful that the risk to your life may not be a strong enough one to induce you to stop using. You need help, and we would like to offer it. Call 800-584-3274 Who Answers? and speak to an expert who will be happy to direct you to the help you deserve. 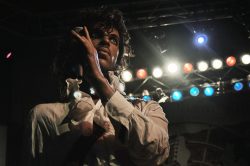 Fentanyl, according to the National Institute on Drug Abuse, is a powerful synthetic opioid painkiller that is similar to other opioids, specifically morphine. However, it is 50 to 100 times more powerful than morphine. It is clearly a Schedule II prescription drug, meaning it has “a high potential for abuse, with use potentially leading to severe psychological or physical dependence.”

The medication is primarily used to treat individuals suffering from extreme pain or to manage pain after surgery. It changes the way the brain and nervous system respond to pain. It may be used to treat patients who experience chronic pain, like Prince, and are physically tolerant to other opioids, among which fentanyl is considered particularly fast acting.

How Can a Person Overdose on a Drug Like Fentanyl?

Often, prescription drugs seem safe because they are provided by medical professionals. But, many users move from strict adherence to a doctor’s instructions to increasingly erratic use. It isn’t hard to fall victim to the addictive quality of opioids, especially when you are using them to battle chronic pain. A harmless short-term prescription can quickly transform into long-term dependence.

Millions who suffer from chronic pain are desperate for relief and they may begin to take larger or more frequent doses to dull their physical agony. When people take larger doses, they develop tolerance to the drug and this means that they must continue taking larger and larger doses to achieve the pain relief initially provided.

Once you develop tolerance, you also become dependent and cannot stop taking the opioid medication without triggering terrible withdrawals. It is likely that Prince was dependent, but no proof was offered that he was addicted.

Regardless, larger and larger doses ultimately leads, for many people, to a dose that is too large for the body to handle. Most people who overdose on fentanyl die from respiratory depression; they go to sleep and they don’t wake up.

What Can Be Done?

It has been demonstrated that abstinence only treatments for opioid dependence, especially for those in chronic pain, are not successful. It actually causes a higher chance of overdose, as people return to drug use to stop the withdrawal symptoms and often their previously taken dose has become too much for them to handle.

Instead, doctors recommend medication-assisted treatment using a drug like buprenorphine, which reduces the potential for misuse, risk in situations of overdose, and withdrawal and cravings. As the newest opioid medication approved by the FDA, buprenorphine has proven highly effective.