The symptoms of opiate overdose are important to know and be able to recognize. If you know someone who abuses opiates, they have a high risk of opiate overdose, so knowing these symptoms is paramount. If you have a friend or loved one who takes opiates for pain by prescription, they could still overdose by accident on the drug. Knowing these symptoms could help you save someone’s life.

What is Opiate Overdose?

Opiate overdose is when someone either accidentally or intentionally takes too high of a dosage of opiates and their body is affected by it. According to the NLM, heroin overdose is incredibly common in dependent users who become “between 6 and 20 times more likely to die than someone of the general population.” Opiate overdose of any type can be deadly because of the severe respiratory depression involved. 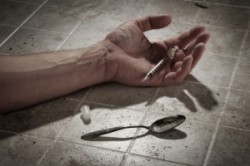 Opiate abuse can lead to overdose.

Here are the symptoms, according to the NLM, caused by heroin and other opiate drug overdoses:

All of the symptoms of opiate overdose will cause a person to be very sluggish, confused, and drowsy. If the person falls asleep and cannot be woken by your voice or by you shaking their arm or pushing on their chest, it is likely that they have overdosed. It is common for people to fall unconscious after overdosing on opiates, and comas are also likely.

Looking for these symptoms will help you discover whether or not a person has overdosed on opiates. The NLM states that “naloxone injection… is used along with emergency medical treatment to reverse the life-threatening effects of opiate (narcotic) overdose,” so make sure to get the person to the hospital as quickly as possible.