Over the past 15 years, the range of new and improved prescription pain pills have evolved into a market of its own as new formulations and brands come out every year. With most falling under the Schedule II class of opiate narcotics, pain pills are controlled substances, but this doesn’t detract from the risks that come with opiate use in general. 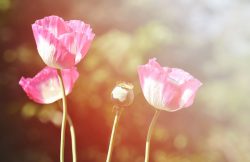 Opiate pain medication and heroin are derived from the same opium poppy plant.

The opium poppy plant is the template for most every opiate type drug on the market. Opium’s nature-made compounds have a similar chemical make-up to the body’s own pain-relieving chemicals, or endorphins. These similarities account for much of the addiction potential associated with prescription pain pill abuse and heroin abuse.

While controlled opiate varieties, such as morphine, Percodan and oxycodone deliver “controlled” effects in terms of potency and duration of effects, these drugs interact with the same brain chemical processes as illegal opiates. On the other hand, heroin can vary from batch to batch as far as potency goes, which does present a somewhat more dangerous scenario, especially for first-time users.

According to the National Institute on Drug Abuse, the question as to whether prescription pain pill abuse is less harmful than heroin abuse has more to do with a person’s pattern of drug use than any real differences between the two drug types.

For further information or help with locating a treatment program, please call 800-584-3274 Who Answers? .

While heroin has, for the most part, remained one of the most powerful opiates overall, newly developed prescription pain pill formulations, such as fentanyl are much stronger than heroin in effect. This degree of change within the brain’s chemical system creates ideal conditions for physical dependency to develop.

Once addiction sets in, both the prescription pain pill addict and the heroin addict will sacrifice most everything to get and use the drug. In the absence of needed treatment help, the effects of addiction slowly but surely destroy the addict from the inside out.

If you or someone you know struggles with prescription pain pill abuse or heroin abuse and have questions about available treatment options, please feel free to call our toll-free helpline at 800-584-3274 Who Answers? to speak with one of our addictions specialists.