Research continues to nullify the myths in regards to treating opioid addictions with agonist medications such as methadone or buprenorphine.  Medication-assisted treatment (MAT) is another tool that can be used to enhance the recovery objectives in both detox and maintenance treatment programs for opioid addictions.  Ensuring access to these evidence-based options of life-saving programs is crucial. To find a treatment center near you that offers MAT, call  800-584-3274 Who Answers? .

Historically, there has been a pervading sense that medications are inappropriate for addiction treatment, despite the beneficial impacts that have been witnessed across many areas of health and safety for the individual being treated as well as the public.  Addiction, viewed as an immorality problem to be punished or stigmatized, with recovery being an all or nothing ideal that is left up to the addict’s willpower to change, can be a powerful deterrent to getting the sufficient help that these people need.

According to the SAMHSA, “If a person is addicted, medication allows him or her to regain a normal state of mind, free of drug-induced highs and lows. It frees the person from thinking all the time about the drug. It can reduce problems of withdrawal and craving. These changes can give the person the chance to focus on the lifestyle changes that lead back to healthy living.”

Myth – MAT Substitutes One Abusive Drug for Another 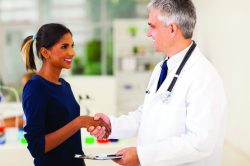 Those who take part in MAT have a higher chance of long term sobriety.

Short-acting opioids like heroin and prescription painkillers have many adverse effects that impair cognitive, emotional, physical, and social functioning capabilities when abused over time.  According to the University of California, “Over the long term, the mortality rate of opioid addicts (overdose being the most common cause) is about 6 to 20 times greater than that of the general population; among those who remain alive, the prevalence of stable abstinence from opioid use is low (less than 30% after 10-30 years of observation), and many continue to use alcohol and other drugs after ceasing to use opioids.”

The fact that methadone and buprenorphine can be abused is not disputable although these medications are designed with longer half-lives which, according to the Institute of Medicine (US), “probably accounts for the diminished or absent physiological and behavioral effects typical of short-acting opiates.”  Synergistically, the improvements in mental and physical health can motivate healthier lifestyle choices and the confidence these individuals need for personal growth, to be productive and accountable, to connect with others, and generally, to retake the control over their lives that was lost in the course of their addictions.

Why Are These Medications Different than Other Opioids?

When used in MAT, these medications act as strategic normalizing and corrective therapies to deter abuse and improve the chemical imbalances in the body by relieving cravings and withdrawals.  They are not meant to cause euphoria once a steady state of daily dosing is achieved, but, can block the effects of shorter-acting opioids that send opioid addicts into a whirlwind of impulsive and self-defeating behaviors.

Methadone has its own special “time-release” mechanism that allows it to remain stored in the liver unchanged and gradually released into the blood as metabolism occurs without debilitating physical or mental health capabilities.  Methadone in blood plasma levels can remain a long time in this manner which makes its effective for the daily administration requirements of a methadone OTP provider.  According to the SAMHSA, “Buprenorphine’s opioid effects increase with each dose until at moderate doses they level off, even with further dose increases. This “ceiling effect” lowers the risk of misuse, dependency, and side effects.”

MAT objectives involve more than the reduction in illicit opioid abuse, helping to decrease associated risks and adverse behaviors including needle sharing, overdoses, crimes, deaths, and communicable disease transfers that put others at risk as well.  There have been, increasingly, rises in the number of infants suffering neonatal abstinence syndrome (NAS) for which an opioid dependent mother could benefit from MAT and the positive support networks these programs provide.

Delivered in a variety of scenarios, with few limitations (other than being dependent on opioids), studies show that patients receiving methadone or buprenorphine in conjunction with behavioral and supportive treatment services in MAT remain in treatment longer with commitments to meeting their treatment goals and maintaining long-term sobriety. Time in treatment, is the single most predictor of success in any substance abuse recovery outcome.

If you’re interested in learning more about MAT, or need help finding a treatment center that offers this program, call us at  800-584-3274 Who Answers? today.