Narcotic agonists, more commonly known as opiate drugs, encompass a wide selection of drug types, most of which produce pain-relieving effects. Heroin, morphine and OxyContin all fall within this drug class.

While effective as pain relief agents, narcotic agonists carry a high risk for abuse and addiction. Unfortunately, the benefits and risks associated with these drugs work hand-in-hand, so there’s no avoiding their abuse potential when using these drugs on an ongoing basis.

Narcotic drugs, also known as controlled substances, include both legal and illegal drugs. The term “narcotics” commonly refers to opiate-based drugs, which act as depressants, slowing down brain and central nervous system functions.

According to the U.S. Department of Justice, controlled substances are classified according to their potential for abuse and addiction. Classification categories include:

Narcotic agonists fall within the Schedule II class of drugs, making them the second most addictive class of drugs on the market. 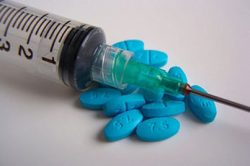 Narcotic agonists are powerful drugs that come in many different forms.

Technically speaking, opiate drugs include those derived from the opium poppy seed plant, while opioids encompass synthetically made narcotic agonists, most of which are prescription pain medications. Opioids are also produced by the brain, central nervous system and digestive tract in the form of neurotransmitter chemicals.

Not surprisingly, the chemical make-up of narcotic agonists and the body’s own opioid chemicals share a close resemblance. This similarity accounts for the high abuse and addiction potential associated with these drugs.

The pain-relieving effects of narcotic agonists result from their ability to interfere with nerve signal transmissions throughout the brain, central nervous system and digestive tract. These effects start in the brain as these drugs force certain groups of brain cells to secrete large amounts of neurotransmitter chemicals.

In effect, the brain can’t tell the difference between narcotic agonists and its own opioid chemicals, which allows these drugs to integrate easily within the body’s opioid system.

According to Macalester College, narcotic agonists work by binding to individual brain cell receptor sites, which, in turn, triggers the release of neurotransmitter chemicals. When used on a regular basis, these effects gradually destroy brain cell structures and weaken the cells’ ability to secrete needed chemical supplies.

These effects transpire regardless of whether a person uses the drug for medicinal or recreational purposes. With continued drug use, brain chemical imbalances start to develop.

Natural opiates include morphine, codeine and heroin among others. In essence, the differences between legal, natural opiates (like) morphine and illegal varieties (like heroin) have more to do with government regulation than the actual effects of any one drug. Both come with high risks for abuse and addiction.

Incidentally, the basic formulation for most all prescription pain medications derives from opium, the natural ingredient found in heroin. Ultimately, narcotic agonists are highly addictive regardless of their legal status.

Opiate addiction treatment medications also contain opium-type ingredients, which accounts for their ability to relieve withdrawal and drug cravings effects. Unlike addictive opiates, narcotic agonists used in addiction treatment are specially formulated to deliver controlled effects over an extended period of time. These characteristics lower the risk for abuse and addiction considerably.

Examples of treatment medications include:

While offering valuable medicinal benefits, narcotic agonists produce a range of serious side effects that tend to build upon one another. First and foremost, the brain quickly develops a tolerance for narcotic agonists and so requires increasingly larger doses over time. Without needed increases, the drug no longer produces the desired effects, be it pain relief or getting “high.”

Brain tolerance level increases continue on indefinitely, for as long as a person keeps using the drug. In the process, the brain becomes physically dependent on narcotic agonist effects. This means the brain can no long function normally in the absence of the drug.

These symptoms only grow increasingly worse the longer a person keeps using narcotic agonists. After a certain point, not even the drug’s effects can relieve withdrawal symptoms.

The potential for narcotic agonist abuse carries an even more dire risk of addiction. Addiction takes hold as the brain’s thinking and emotion-based regions become dependent on the effects of the drug. At this point, users have developed a psychological dependency.

Once a psychological dependency forms, a person “believes” he or she can’t cope with daily life without the drug’s effects. This mindset breeds continual drug cravings, which in turn influence a person’s behavior, motivation and priorities.

Prescription-based narcotic agonists no doubt meet a definite need in terms of pain management treatment as many people suffer from conditions involving moderate to severe pain symptoms. However, these drugs carry significant risks for abuse and addiction when not taken as prescribed. Likewise, narcotic agonists such as heroin reflect the worst of the worst in terms of what these drugs can do.