Nowadays, it’s no secret how heroin addiction has reached epidemic proportions in the United States. Whether a person transitions from prescription pain pills to heroin or starts out using heroin, heroin effects all but hijack the brain’s regulatory functions over time. As one of the most powerful opiates in the market, a person can actually become addicted to heroin as of the first time trying the drug.

While this drug exerts its initial effects on the brain, with continued use heroin gradually warps a person’s overall psychological makeup. In the absence of needed treatment help, heroin’s damaging effects will continue to exert increasing control over a person’s thinking and behaviors.

Heroin’s Effects in the Brain

Much like prescription pain pills, heroin interacts with the same chemical activities that regulate pain sensations throughout the central nervous system. These interactions also account for the feelings of euphoria and calm the drug produces. In effect, heroin alters the brain’s neurotransmitter activities, and over time reconfigures the brain’s chemical pathways, according to the Journal of Addiction Science & Clinical Practice.

During the course of using heroin, the brain quickly develops a tolerance to the drug’s effects, requiring increasingly larger doses to produce the same desired effects. In the process, users start to experience withdrawal effects that grow worse in severity with continued use. At this point, a person “needs” to take heroin in order to gain relief from uncomfortable withdrawal effects.

Heroin Addiction Effects on the Mind 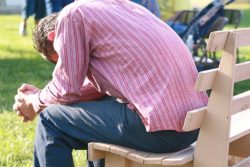 Once you build a tolerance to heroin, withdrawal symptoms are experienced, leading to continued heroin use.

In essence, the brain reward system comes to assign a high priority to the “high” effects brought on by heroin. This change develops out of the repeated surges in dopamine neurotransmitter chemicals that heroin incites, according to the University of Utah Health Sciences. As dopamine, for the most part, regulates brain reward system functions, it doesn’t take long at all before this critical system falls under the control of heroin’s effects.

At this point, getting and using the drug takes on top priority driving compulsive drug-seeking and drug-using behaviors as other important life areas suffer the consequences.

The physical and psychological effects of heroin on the brain form a vicious cycle that works to strengthen addiction’s hold within a person’s daily life. With continued drug use, heroin’s damaging effects gradually alter the brain’s chemical pathways as well as its overall structural makeup.

Considering how the drug takes over the brain’s workings, it’s easy to see how heroin addiction epidemic has swept through the country as it has. If you or someone you know struggles with heroin addiction and have further questions, or need help locating a treatment program in your area, please feel to call our toll-free helpline at 800-584-3274 Who Answers? to speak with one of our addictions specialists.