Today, even the most responsible of citizens can fall prey to the lure of heroin and the trap of addiction. What often starts out as a seemingly harmless prescription pain pill indulgence gradually turns into a daily requirement. Before long, a person seeks out the stronger effects of heroin to meet the brain’s growing needs.

Much like the occasional prescription pain pill indulgence can turn into a daily routine, heroin abuse can quickly turn into heroin addiction without a person’s even knowing it. Spotting signs of heroin addiction early on can help save you much heartache down the road and be a first step towards seeking out treatment help.

While the terms abuse and addiction may be used interchangeably, there’s actually a big difference between the two practices. More often than not, ongoing heroin abuse creates the conditions for addiction to develop, though this is not always the case. As one of the strongest opiate-based substances in existence, a person can realistically become addicted to heroin as of the first time trying it. 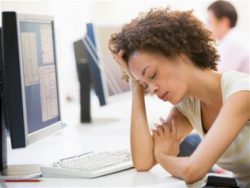 Heroin addiction can lead to productivity issues at work.

According to the University of Maryland, heroin abuse takes shape over time as the brain comes to rely on the drug’s effects to function. In effect, heroin forces neurotransmitter producing brain cells to produce excess amounts of chemicals. This surge in neurotransmitter chemicals accounts for the “high” effects of the drug.

In the process, brain cells take on considerable structural damage, at which point more heroin is needed to produce the desired effects of the drug. This cycle of cell damage and increasing dosage amounts continues on for as long as a person keeps abusing the drug.

Ultimately, widespread chemical imbalances start to take shape throughout the brain as a result of heroin’s effects. These imbalances eventually start to impair the areas of the brain that affect a person’s thinking processes, motivations and even his or her priorities. At this point, the makings of heroin addiction are at work.

Compared to heroin abuse, signs of heroin addiction have more to do with a person’s behaviors and overall lifestyle from day to day, according to Indiana University Bloomington. As getting and using heroin take on greater priority in a person’s life, he or she will likely not notice the negative consequences that result from the drug’s effects.

Signs of heroin addiction to watch out for include:

With continued heroin abuse, the above quality of life issues will continue to see ongoing decline as the drug’s effects take increasing control over a person’s thoughts and behaviors.

Perhaps the greatest obstacle to acknowledging a heroin addiction problem lies in the addict’s belief that he or she can stop using at will only to find out that this is not the case. Without needed treatment help, heroin’s effects reframe a person’s psychological makeup to the point where everything he or she thinks, feels and does centers around getting and using the drug.

If you or someone you know struggles with heroin abuse and have more questions about the process of heroin addiction, please feel free to call our toll-free helpline at 800-584-3274 Who Answers? to speak with one of our addictions counselors.