While Vicodin abuse can be difficult enough to manage, Vicodin addiction takes drug abuse practices to a whole new level, all but hijacking a person’s will and behavior. For these reasons, it’s important to get a handle on Vicodin abuse before a person loses the ability to do anything about it.

Vicodin exists as a brand name version of hydrocodone that’s mixed with acetaminophen. According to the U. S. Department of Health & Human Services, hydrocodone produces powerful depressant-type effects on brain and central nervous system functions. The addition of acetaminophen, a non-opioid pain relief agent, works to enhance hydrocodone’s effects.

Vicodin’s ability to depress or slow down chemical processes in the brain and central nervous system work well at blocking incoming pain signals from reaching the brain, but can create a series of problems when used on a continuous basis. In effect, this drug’s ability to interfere with the brain’s chemical pathways plays a central role in turning a Vicodin abuse problem into a full-blown addiction. 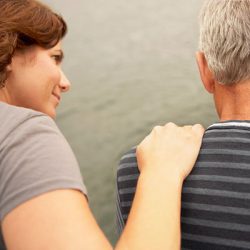 Vicodin is often used to manage pain, but can easily become tolerated and abused.

Vicodin abuse develops out of the ongoing effects of the drug on neurotransmitter-producing cells in the brain. The drug works by stimulating the release of dopamine, serotonin and norepinephrine from cells in larger than normal amounts. These effects not only help relieve pain symptoms but also produce unintended side effects, such as euphoria and calm, which further contribute Vicodin’s abuse potential.

Over time, the cells involved in this process undergo considerable structural damage as a result of being overworked. At this point, cells become less responsive to Vicodin’s effects, which ultimately drive users to take even larger dosage amounts to experience the drug’s desired effects. Before long, the Vicodin abuse cycle takes shape as cells continue to weaken and users continue to increase their dosage amounts.

The Transition to Vicodin Addiction

During the course of a growing Vicodin abuse problem, widespread chemical imbalances start to develop throughout the brain and central nervous system. These imbalances inevitably start to impair other areas of the brain. The transition from Vicodin abuse to Vicodin addiction develops as the drug’s effects start to compromise brain reward system functions.

According to the National Institute on Drug Abuse, Vicodin’s effects on the brain reward system work to reconfigure a person’s sense of purpose in terms of his or her priorities and motivations in daily life. While the physical effects of the drug set the ball in motion in terms of the chemical imbalances that form, once these imbalances reach a certain point, getting and using the drug becomes the sole motivation in a person’s life.

Is there a Street Name for Vicodin?

When to Get Treatment Help

Considering how opiate drugs infiltrate the brain’s chemical system, it’s easy to see how Vicodin abuse can easily turn into Vicodin addiction over time. While some people can stop using on their own, more often than not, some form of professional treatment help is needed to regain control of a Vicodin addiction problem.

If you or someone you know struggles with Vicodin abuse and have more questions about how addiction works, please don’t hesitate to call our toll-free helpline at 800-584-3274 Who Answers? to speak with one of our addictions specialists.