As the most frequently prescribed prescription opiate in the United States, hydrocodone exists as one of the most commonly abused opiate drugs. According to the Drug Enforcement Administration, an estimated 65.5 million prescriptions for hydrocodone were dispensed during the first half of 2013.

Hydrocodone appears under hundreds of generic and brand name products, with Lortab and Vicodin being the most frequently prescribed. Both Lortab and Vicodin combine acetaminophen with hydrocodone to enhance the drug’s pain relieving effects. Hydrocodone’s chemical makeup most resembles that of codeine, while its analgesic effects are comparable to morphine as far as potency goes.

As with most all opiates, hydrocodone works by increasing neurotransmitter secretions in the brain and central nervous system, which in turn prevents incoming pain signals from reaching the brain. Over time, these interactions throw the body’s chemical system off balance, and in the process create a hydrocodone-dependent chemical environment in the brain.

From Bad to Worse 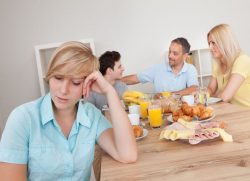 Some people self-medicate with hydrocodone in order to feel more comfortable in social situations.

Like the effects of hydrocodone abuse, emotional problems can create chemical imbalances in the brain. According to the University of Utah Health Sciences, it’s not uncommon for someone struggling with feelings of depression or anxiety to try to self-medicate uncomfortable symptoms with drugs and alcohol.

If you’re trying to self-medicate emotional problems through hydrocodone abuse, certain patterns of behavior will start to take shape over time. Drug use patterns to watch out for include:

With continued hydrocodone abuse, users start to experience episodes of withdrawal in response to growing chemical imbalances in the brain. Taking more of the drug to alleviate withdrawal effects becomes a common practice. This pattern only works to set a vicious cycle of drug abuse and emotional duress in motion.

Emotional problems cause dysfunction within the brain’s chemical system. As with all states of imbalance and stress, the brain naturally tries to seek out ways of relieving discomfort. Hydrocodone abuse practices only stand to make a bad situation worse over time. In effect, hydrocodone abuse leaves the door wide open for serious psychological disorders to develop.

If you or someone you know struggles with emotional issues and hydrocodone abuse and have more questions about the effects of this drug, please feel free to call our toll-free helpline at 800-584-3274 Who Answers? to speak with one of our phone counselors.