Naloxone is an opioid antagonist used to reverse the potentially fatal effects of opioid overdose. Unintentional overdoses involving opiate drugs are responsible for thousands of deaths annually and naloxone is the preferred antidote. It works by quickly binding to the same receptors as heroin and other opioid drugs, without activating the same responses. In opiate overdoses, naloxone can be administered via injection and within minutes, is able to replace the opioid at the receptor sites and block the opioid effects.

Naloxone on the Street

In the mid 1990s, community-based programs began offering opioid overdose prevention services to people who abuse drugs, their families, friends, and service providers. The programs provide education regarding overdose risk factors, recognition of opioid overdose signs, and appropriate responses to an overdose. Because of the success that naloxone has when it is administered at the first signs of overdose, many of these programs offer education regarding naloxone administration and distributes doses in vials for people to use immediately when they recognize an opioid overdose occurrence. Between 1996 and 2010, more than 53,000 doses were distributed to people who were trained through these programs and according to the Center for Disease Control, “From the first naloxone distribution in 1996 through June 2010, the programs received reports of 10,171 overdose reversals using naloxone.” 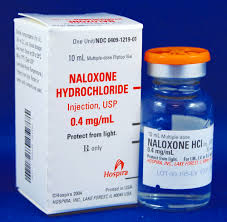 Naloxone helps people recover from an overdose on opiates.

Respiratory depression is one of the first signs of overdose and naloxone has been highly effective in reversing this symptom, thereby, saving thousands of lives. Cardiovascular depression is another fatal symptom of opiate overdose along with signs of inability to respond or unconsciousness. With more people abusing prescription painkillers, the increase in unintentional overdoses has reached epidemic proportions.

Those who abuse opiates develop a tolerance to the drugs and require more of them to achieve the desired effects. Opiate addicts typically begin to snort or inject the opiates to get a more intense “high” or they may combine opiates with other drugs or alcohol to enhance the effects. Sometimes, an opiate addict will undergo detox and rehab treatment for their addiction and when they relapse, they go back to the same dosage they were using before. These are all common causes for opiate overdoses and sadly, many more overdose victims will die because they will not get emergency medical treatment in time.

Knowing how to administer naloxone and having doses available is good advice for anyone who knows an opiate abuser or has concerns for those abusers in their community. It might be the only chance they get to survive.