Opiate addictions in general become a stronghold within the addict’s life, leaving him or her helpless to act on his or her own best interests. These effects are no less powerful during pregnancy, especially in cases of chronic opiate addiction. While not intending to do so, a woman struggling with opiate addiction during pregnancy exposes her developing fetus to a range of health complications that can persist long after the birth of the child.

Methadone and buprenorphine acts as medication-assisted treatment therapies, both of which work to relieve the withdrawal and drug cravings effects that so often plague addicts in recovery. While both medications essentially accomplish the same purpose, they do differ in range of effects so what works for one person may not necessarily work for another. Understanding the differences between these two treatments can go a long way towards helping a woman maintain abstinence throughout her pregnancy and ensure the safe delivery and birth of her child.

In general, opiates depress or slow down chemical processes throughout the brain and central nervous system. Over time, these effects can impair the body’s major system functions. This degree of interference can have grave consequences during pregnancy.

According to the National Institute on Drug Abuse, the withdrawal episodes that develop during the course of an opiate addiction not only affect fetal development, but also place a developing fetus in considerable danger. Chronic opiate abuse also compromises the mother’s overall health making pregnancy and delivery complications all the more likely. 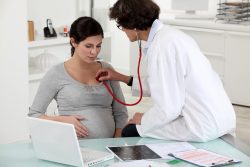 Methadone is currently the only approved medication to treat opiate addiction in pregnant women.

Methadone, a synthetic opiate medication, works by mimicking the effects of addictive opiates and supporting damaged chemical processes in the brain. Unlike addictive opiates, methadone carries a low risk for addiction as the drug is formulated to produce slow-acting effects. In the process, the risk of relapse decreases considerably as methadone effects greatly reduce the withdrawal and cravings effects commonly experienced in recovery.

Like methadone, buprenorphine is a synthetic opiate, capable of mimicking the effects of addictive opiates in the brain. Buprenorphine first gained approval as an opiate addiction treatment in 2002, but has yet to receive approval as a treatment during pregnancy.

In terms of overall treatment effectiveness, methadone has a long track record of successful outcomes, though much of this has to do with a person’s motivation to get and stay well. While buprenorphine hasn’t as of yet received federal approval as a treatment during pregnancy, it does work well as an alternative treatment approach in cases where methadone proves ineffective.

If you or someone you know are pregnant and struggle with an opiate abuse problem, please don’t hesitate to call our toll-free helpline at 800-584-3274 Who Answers? for more information on methadone and Suboxone treatment. Our phone counselors can also help connect you with treatment programs in your area.