As the most frequently prescribed prescription pain pill in the United States, rates of hydrocodone abuse exceed those of all other illicit drugs. According to the Drug Enforcement Administration, this drug makes for a highly effective pain reliever, but also comes with a high risk for hydrocodone addiction.

As tolerance levels continue to rise, users start to experience uncomfortable side effects, also known as withdrawal. Soon thereafter, emotional and/or psychological problems start to develop, all of which leads users to engage in self-medicating practices as a means for relieving uncomfortable symptoms. 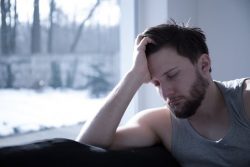 Withdrawal effects develop out of the growing chemical imbalances in the brain brought on by hydrocodone abuse. According to the U. S. National Library of Medicine, an imbalanced chemical environment limits the brain’s ability to regulate the body’s functions, with withdrawal episodes being the result. In effect, the brain has become physically dependent on hydrocodone to function normally.

Not surprisingly, taking more hydrocodone helps relieve withdrawal; however, doing so can quickly become a habit as these effects will only worsen in severity over time.

The brain reward center relies on stable chemical levels to function normally. This center determines a person’s overall psychological makeup in terms of his or her daily priorities, motivations and overall mindset. As hydrocodone’s effects continue to skew chemical levels further and further off balance, the brain reward system starts to redirect a person’s priorities and motivations towards getting and using the drug.

By the time a full-blown hydrocodone addiction takes hold, the drug has become the center of the addict’s world at the expense of family, friends, work and self-respect. Once a person reaches this point, he or she relinquishes total control of his or her life over to the drug’s effects.

Ideally, it’s best to seek out needed treatment help before physical dependence takes hold as the longer you wait, the harder it is to stop taking the drug. Otherwise, the need for hydrocodone addiction treatment will become increasingly apparent as a person’s physical and psychological well-being suffers ongoing decline.

If you or someone you know struggles with hydrocodone addiction and have more questions, or need help finding treatment programs please feel free to call our toll-free helpline at 800-584-3274 Who Answers? to speak with one of our addictions specialists.